Last week, my university opened up an art exhibit called, “constructive interference.” The reception featured bottles of wine on a long table with a blue table cloth and fresh strawberries and hors d’oeuvres. The attendees clustered together, sipping their wine and chatting in the bright light streaming through the large windows. One of the artists hovered protectively around his sculpture, explaining it with animated gestures to a couple who I could not tell were enraptured or simply captured. A video played in the background, but the volume was too low for anyone to hear. One of the people featured in it stood talking with her back turned to the monitor, her heavy earrings catching the light. Next to me, a young man—a student, probably—looking at one of the works on the wall dropped his strawberry in his wine; he looked anxiously around to see if anyone noticed, then hastily fished it out.

Perhaps this was, in some ways, a “typical” art opening. I haven’t really attended any to have a good comparison. But what was different about this art exhibit is that it opened up in what is basically the lunch room of Emory University’s Center for Global Safe Water and that its central theme was sanitation. As one of the innumerable e-mails with attached flier that I got said,


“The exhibition is an interdisciplinary exploration of the impact of safe sanitation on human health that brings together artists and Emory scientists. Through an agenda anchored equally in art and science, participants will gain a greater understanding of the role of visual communication in safe sanitation and health issues.”
The opening included the above-described reception followed by a panel discussion. Art exhibit on sanitation? I am totally there.
Art on sanitation—or, let’s face it—toilets, is not unprecedented. There’s art that features toilets that is exhibited in galleries—like Marcel Duchamp’s Fountain or Claes Oldenburg’s Soft Toilet—and usable restrooms that feature or are art (like this one). I find a lot of these pieces often force us to look at our own concepts of privacy, gender roles, body, dirt, and art (but more on that to come in later posts), and so I got pretty excited.
Unfortunately, I was disappointed.
What was marketed as a interdisciplinary project of equality and teamwork between art and science, I found, instead, replicated the inequality of art vs. science that is so often seen in the real world. While art has the ability to capture the very human aspects of sanitation issues—the humiliation of being caught when going in a field, the agony and shame of the contraction of diarrheal diseases, the despair when one’s child literally shits themselves to death—scientific discourses, in many ways, does not really have the vocabulary to represent human experience in the way that art can. Which is fine—I’m not trying to insult science. Science is great. I will not go to my local artist for a vaccination or an update on how clean my water is today. But I feel that what was missed here was an opportunity for art to add to significantly add to the conversation. 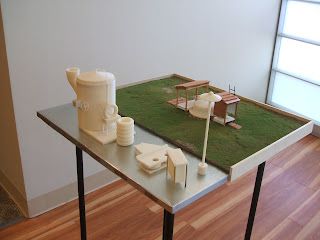 At this exhibit, the art was focused on the waste and the hardware for the most part. I mean, it was very well done. Posters by the Cloacina Project, an Oregonian team of Molly Danielsson and Matthew Lippincott, portrayed decomposition, various bits of sanitation hardware, and wastewater treatment in watercolor and ink, which you can check out at their website. (They gave out free copies, and I have one on my wall right now.) Steve Jarvis and Susan Klause’s Humethan Digester System sculpture modeled a biogas digester system. (See above pic.) The video by Stan Woodard, Nat Slaughter, Danielle Roney, and Robby Kee [anybody have a website for him?] endeavored to bring in a human aspect by featuring clips of individuals telling about some of their harrowing experiences in dealing with toilets in other countries, but even that came secondary to a discussion of the disease burden inflicted by fecal-borne diseases. Probably my favorite part were the large decals on the windows featuring adorably anthropomorphized waterborne pathogens. (They were from the video, so I am unsure who to directly attribute the design to.) 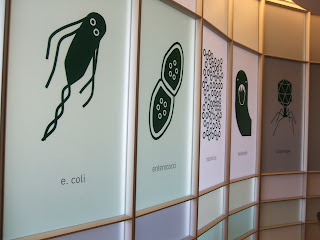 Overall, while I enjoyed some of the specific works, I felt that the overall layout represented a missed opportunity for the artists to really contribute something that is absent in the scientific vocabulary or to challenge some of the boundaries, paradigms, and assumptions that are held, which is something that art is so adept at doing. Instead, the scientific focus on feces disposal was merely replicated in art form; in doing so, the conversations of art were subsumed in the discourses of science. It’s discouraging to see that, even in an art exhibit and an ostensibly interdisciplinary project, we see the replication of the hierarchy of disciplines that pervades academia as is.
On the plus side, I applaud the attempt to create such a project, and hope that it opens up a space in the future for more attempts to be made. Let’s talk about toilets more, please.
Posted by Jen Barr at 8:08 AM