So, as you might have (or have not) noticed, I've been rather quiet of late. This is due to a confluence of personal, professional, and academic factors that have meant that I have not had the time or energy to devote to the blog. I thought I would make a sort of official announcement that I won't return to blogging until April.

However, if anyone wants to write a guest blog post, I would be very happy to throw them up here! My e-mail is jen [dot] anne.barr [at] gmail [dot] com .

Have a great March.
Posted by Jen Barr at 4:07 PM No comments:

How to shock a celebrity and irritate an anthropologist

So, recently, the internet plunked this video in front of me:

For those of you who didn’t care to watch, it begins by showing the reactions of a series of celebrities to a particular video. Their reactions range from shock, disgust, horror. The viewers are left in suspense—what is this video that they have strong reactions to?

We are then treated to the video itself: a collage of parasitic diseases prevalent in the developing world: elephantiasis, river blindness, trachoma, schistosomiasis, trichuriasis (whipworm), ascariasis (roundworm), and hookworm. The photo and video collage alternates between people suffering from the diseases in visible ways (trachoma, elephantiasis) to the parasites themselves. I won’t deny that it is powerful to watch: these diseases are acutely painful (although not always fatal) and incredibly graphic. The video finishes with a plea to donate to their campaign to “End 7”: End 7 Diseases by 2020. According the End 7 Campaign website, a donation of 50 cents can provide the drugs to make one person parasite-free for a year. 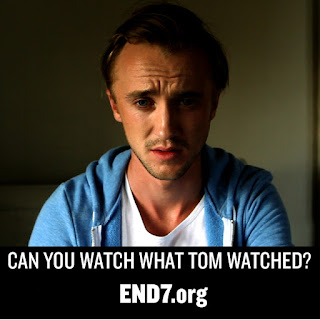 In literature and linguistic analyses, there is something called a synecdoche, in which a part is made to stand for a whole. For example, if I say “wheels” to refer to my car or “hired hands” to refer to workmen. In this video, the pathogens they show, the conditions—these are synecdoche for human beings. The entire structure around illness—the politics and the economics that cause these people to live in conditions that lack the sanitation that would prevent them from getting these diseases—and the people themselves who have selves and lives outside of the illness were distilled into icky pictures of worms. Images of worms and images of people are quickly flashed together, and in many ways, rhetorically conflated. Think about that—people with trachoma = round worms.

Can you imagine what would happen if we tried a cancer campaign that represented people with cancer by images of their tumors? I felt nauseous just typing that, and I’m guessing that you probably have a strong reaction as well. Why do we think this is ok to do to people in different countries? We have different standards for media portrayal of people in different countries (as I have previously pointed out), and we need to stop it.

You could argue that I’m being over-critical, that as long as money is being raised for the cause, does it matter how we motivate people to act? It’s an important question, and one that different people have very different feelings about. But representations inflect how we think about others and how we choose to act in relation to them.

Watch the video again. If those are the kinds of images we have of people in other countries (and this video is far from being an outlier), then how do you think we’re going to act? Maybe you can just open up a newspaper and see.