Is public urination a problem?

On a relatively quiet street corner, deep in the depths of the old part of the Indian city of , I pass a high wall, painted with, “URINATION PROHIBITED.” 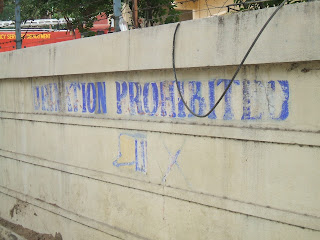 I frown. I was used to seeing gentlemen standing on the sides of roads or up against walls in the tell-tale wide-legged stance. But this wall was different. There weren’t even the dark red betel stains (a dark red chewing tobacco popular in the country) on the wall. “What do you think that’s about?” I ask my companion.
“It’s a graveyard,” she says.

That made sense. Indian Muslims traditionally bury their dead, so their bodies may rise up later. Of course you would not want such a sacred place being defiled by urine.

Defiled—interesting choice of words, says I to myself. Why is urine defiling? To many of us, public urination is disgusting. According to Rozin and colleagues’ CAD moral emotions hypothesis, offenses against the community breed contempt, offenses against individual autonomy breeds anger, and offenses against ‘divinity’ (purity, sanctity) breed disgust. Public urination, then, is a very literally an offense against divinity in the case of the graveyard wall.

Many people have very strong reactions to public urination. In , a man was allegedly killed over the fact that he was urinating at a gas station. Another article asks why this is such a problem in , and cites a lack of “civic sense” or a lack of public urinals as the cause.

This is bemoaned as an issue in Western countries as well. In the US, you can be cited as a sex offender for urinating in public or receive huge fines, in spite of the fact that for many people, there are literally no other places to go. (Think taxi cab drivers in —presuming you could find a restroom and that someone would let you use it in a Starbucks or such, where would you park?) Anxieties about public urination in late hours has resulted in urinals in the that rise up out of the ground in the late hours in order to accommodate drunk men.

I’m going to stop here and point out that anxieties about public urination are entirely focused around men. Women have been long conditioned to hold it for long hours rather than drop trousers and squat in public spaces. There is also a significantly different amount of bodily exposure involved in the two processes—guys just unzip and go, women have to actually expose their entire genital area.

First off, the smell is not pleasant—whether this is a biological predilection or more of the association of, ‘ewwww someone peed here, that’s weird’, I’m not going to try to argue right now. Second, there are those who argue that the acid damages statues and cement. Third, it can leave stains which recall that someone pissed in public (and dark stains are not necessarily very pretty).

As far as the act itself, people are not comfortable with men’s genitalia being in public places. In great part, in the , this is closely related with our deep discomfort with our bodies—as animalistic and natural, as ‘dirty’ (ie, getting rid of fluids and waste), and as sexual. (On the human body, the parts of our body involved in sex and the parts involved in elimination are close together, creating a deep discomfort with both processes and their relations to each other.)

But I’m going to point out that none of these are health issues. They are, for the most part, aesthetic issues, caught up in our ideas of where urination can take place and what parts of the body can be exposed where and who can expose them. (Body exposure is notoriously culturally contingent—shoulders, for example, are scandalous in , whereas stomachs, not so much. Here, more or less the opposite.) Urine is actually quite benign, disease-wise. There are almost no diseases that can be transmitted via urine.

So when we see a rise in concern with public urination in other places, we have to ask, what shifted? What changed about aesthetics or body beliefs or disgust or what-have-you? Because public urination isn’t a health hazard, for the most part. So why do we have a problem with it, and why is it emerging as a problem in other places? What can this tell us about the spread of Western cultural values and anxieties?

This all said and done, I am going to add that if a drunk guy pisses on my lawn on a Friday night, that doesn’t mean I’m going to shrug it off as culturally relative.