Toilets of the future

I've had several friends (thanks Malcolm, Drew, Holly, and Van!) send me articles about Gates Foundation's Reinvent the Toilet Campaign's Fair in Seattle that ran from August 14th to the 15th. This is a campaign I've been very interested in. For those of you who haven't heard of it before, I'll let their snazzy video show you what it's about:


Gates Foundation is on the front of recognizing and acting on the realization that clean water is not effective without sanitation.

The toilet today is pretty much the same one that was invented a couple hundred years ago. While we've updated all other technologies, this one has pretty much kept the same. In "developed" countries, toilet flushing is the number one use of domestic water. It is a major waste of one of our most precious resources. In developing countries, the flush toilet is impractical, requiring a huge and complex infrastructure and vast quantities of water.

Gates Foundation has recognized this and decided to tackle it by coming out with a challenge: reinvent the toilet. Make it environmentally safe, make it cheap, make it possible for developing and developed contexts, and make it pleasant to use. (I particularly applaud the last one, as this is often overlooked in these discussions.) They issued the challenge a year ago, and on August 14th, they announced the winners.

First prize of $100,000 went to California Technical Institute, near Los Angeles, California. (This is the same university, incidentally, who oversees Jet Propulsion Laboratories, who put Curiosity on Mars.) 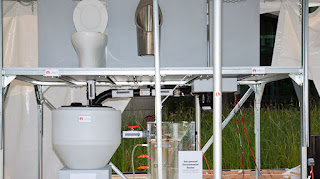 Loughborough University in the UK won $60,000 for their second place entry. Their toilet "transforms feces into biological charcoal (biochar) through hydrothermal carbonization (decomposition at high temperatures without oxygen and in water) of fecal sludge." It will be powered by burning said biochar and will recover water and salt from the waste. 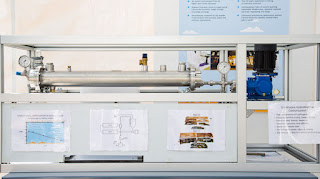 University of Toronto in Canada won $40,000 for its design that sanitizes feces for resource recovery through "mechanical dehydration" and "smoldering" (low temperature, flameless combustion) within 24 hours while urine is zapped with a UV light. 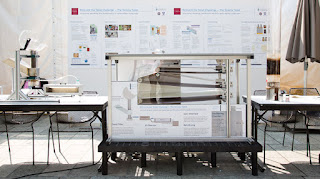 Eawag, the Swiss Federal Institute of Aquatic Science and Technology, won an honorable mention for the user interface of its urine diverting toilet. 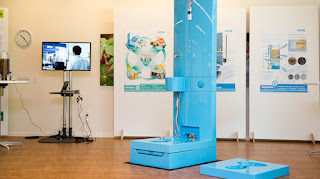 You have to admit, it does look pretty.

What do these disparate designs have in common?

1) They're decentralized. They don't need to be plugged into some massive state infrastructure.
2) They don't create massive amounts of waste that needs to be managed by a government or personally scooped out by anybody.
3) They create new resources from "waste."
4) They don't suck to use.

So what next? The fair brought together hundreds of designs, but new toilet designs aren't going to be that helpful if they're not built or bought.

Alfredo Behrens of Harvard Business Review's blog asks, "Are you ready?" for the demand of markets in India and China. The largest supplier of toilets in the world is Roca, in Barcelona, which sold 32.5 million units in 2010. This is nothing in comparison with Behren's estimate of a coming demand for as many as 150 million toilets in India alone. Is it possible that these new toilet designs can enter the market this way?

Another possibility might come from a government-subsidized retrofitting of old houses in cities where the sanitation infrastructure is falling apart. Instead of investing in a crumbling infrastructure or expanding it in urban sprawl situations, what if the government paid for toilets like the ones I've discussed, that would not require they be plugged into a larger system?

The possibilities are tantalizing. With technical innovation working to push the sanitation revolution farther along, it's up to policymakers, business people, and everyday people to help carry it even farther.
Posted by Jen Barr at 4:19 AM 2 comments:

From pine cones to paper--history of toilet paper, part 2

The gap in the histories I've found is fairly large once we get past the Romans and their sponge sticks. As you might know from desperate experience, a variety of materials can (and have been) used to wipe.

The Chinese are "widely" agreed to be the first people to make paper for that use (and by widely, I mean the internet articles agree). According to this site, a Chinese official in 589 BC mentioned using paper to wipe; later, an Arab visitor in 851 AD also confirmed that the Chinese were using paper. Things didn't get fancy until 1391, when the royal family would have 2 by 3 feet perfumed sheets made for themselves to wipe.

I'm going to make an enormous leap forward in time to 1857, when a New Yorker named Joseph Gayetty marketed the first known toilet paper as "Gayetty's Medicated Paper."
﻿
It same in single sheets, was imbued with aloe, and every square was monogrammed with his name.


Toilet paper doesn't appear on a roll, though, until 1871, when a gentleman by the name of Seth Wheeler, of Albany, New York, filed for a patent for perforated paper on a roll.

However, toilet paper on a roll really didn't get rolling (sorry) until the Scott Paper company picked it up in 1879. When they first released the product though, the Scott company did not want to soil their family name with such a vulgar product. Instead, they used the names of their distributors, which came out to some 2,000 different names. In 1902, they purchased the WALDORF (R) trademark (like the Waldorf hotels), and they subsequently started selling under that name. The company streamlined their processes, and by 1925 Scott Paper company was the leading brand of toilet paper in the world.

But how do you market something which you basically just use to wipe yourself, then throw away? How do you market a product that relates to a vulgar, lowly bodily function that people really don't like talking about? (1925 was after most of the big city clean-ups and the sanitization of the Americans, so shitting was becoming serious shaming territory.) Arthur Scott came up with one of their best slogans: "Soft as old linen." He tied a product that is generally tied with shit to a luxurious product and comfort.

Fortunately for the Scotts, indoor plumbing and hygiene awareness was on the rise. Riding this wave, the Scotts began to market their product as a health-promoting product. By marketing it as such, it allowed them to advertise in magazines such as Good Housekeeping. By talking through a medical lens, a lot of topics that are taboo become acceptable.

Their marketing worked; toilet paper was an official part of American life. During the Great Depression, Scott Paper did not have to lay off a single worker. Charmin is founded in 1928, when a female worker commented that the packaging was "charming." Charmin sought to appeal to women by making their packaging fashionable, with a woman's cameo. 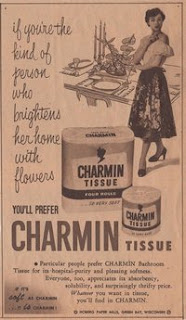 Like a lot of history and a lot of our habits, much of our behavior has been influenced by a few clever men and good marketing campaigns.

Today, toilet paper is still commonly used in Europe and the US. Many of us are quite fond of it and struggle with trying to use other methods (myself included). However, toilet paper is responsible for 27,000 trees being cut down every day. Toilet paper, furthermore, can be quite taxing on sewage systems, frequently requiring more water to transport the waste. So next time you're somewhere and you have the chance to use a bidet or a lota, why don't you try it? Who knows, you might like it better.

Or maybe we should go back to the sponge on a stick?

In the 19th century, one type of scavenger in London were the "pure finders": "pure" is another word for dog feces. They would scavenge dog feces from the Thames (which was, at the time, a giant sewer) and sell it to tanners, who would use it to clean leather.

How the Romans wiped (history of toilet paper pt. 1)

The Romans used to use sponge sticks:

Romans had some of the most sophisticated restrooms in the world, with dual streams of water: one for defecating in, and another to rinse off the sponge stick which you shared with all of the other guests in the restroom. The wealthy Romans, however, would use scented water.

The Toilet Paper Encyclopedia has a fairly fascinating historical list of different materials people have used throughout history to wipe, including:

It's a fairly eclectic mix, but consider, if you will, what people use: trash, right? Things that are discarded. This makes sense, of course, because (for the most part, anyway) you don't want to keep anything that has shit on it. But wiping is an intimately physical act--these materials get close to a part of our bodies that very little gets to get close to. We have to be ok enough with these external items to let them come to an internal part of us.

Or is it that way? Instead, is there a shared concept amongst these groups that defecation is a "trash" process that is external to other parts of our self? We don't wipe out face with a Sears Roebuck catalog page, but we will wipe our ass with it. Our concept of our body is inherently divided and hierarchical; some parts of us are more intimately associated with our concept of our selves (faces, for example, are some of the most important parts of our bodies with this) and others we have distanced ourselves from (the anus).

For more on toilet paper in history, be sure to check out the Virtual Toilet Paper Museum (yes, it exists) for a fascinating and addicting photo gallery. This story of toilet paper and what we can learn about people from it will continue in later posts.

**UPDATE**
Check out part two of the history of toilet paper here
Posted by Jen Barr at 9:01 PM 27 comments:

When most people travel, they take pictures of waterfalls, beautiful landscapes, fascinating people.

I do that too. I just also take photos of toilets. 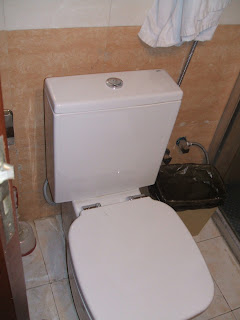 Toilet in the hotel in Addis Ababa, capitol of Ethiopia. I was mostly interested in this one because the toilet is a rectangle. Does anyone know of anywhere else in the world the toilet seats are rectangles? It seems counterintuitive, since our buttocks are more round than rectangular. If you're wondering, it's not quite as comfortable. 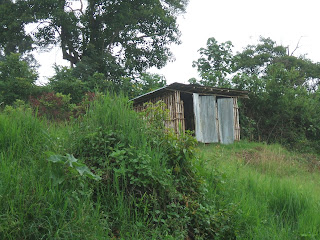 This picture is the latrine of a school in rural Ethiopia. The school is in bad shape--when it rains, the children don't go to school, because the stick and mud structure is falling apart and cannot keep out the rain. Many places in Ethiopia don't even have a latrine. This one doesn't have running water, which is a biggest problem for not only hand washing, but also for young girls who are dealing with menstrual waste. 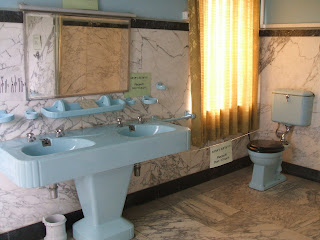 For complete contrast, this is the toilet in the palace of Haile Selassie, former emperor of Ethiopia from between 1916-1974. I don't know exactly when it was built. The bathroom also includes a bathtub and a bidet. 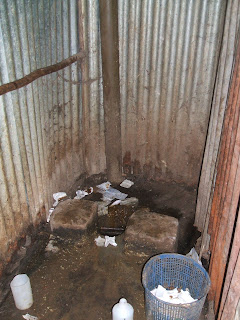 And now for the opposite...
Toilet in the hotel at my research site, a rural farming town near Jimma. It's as disgusting as it looks. We tell people that toilets are cleaner, but when their experiences look (and smell) like this, do we really think they'll believe us? I would rather have gone in a field.

Now, my friends are doing it for me too. This pictures if a medieval toilet in Salzburg Castle in Austria. She couldn't get closer, but like most medieval castles, it's most likely to operate on shitting in a hole that hangs out over the edge of the castle walls. 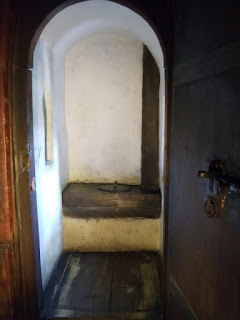 If you have toilet pictures, send them to me!
Posted by Jen Barr at 6:04 AM 11 comments: